Delve into Irish history on this tour of the Jeanie Johnston Tall Ship, a replica of a 19th century ship used to escape the Great Famine of Ireland. 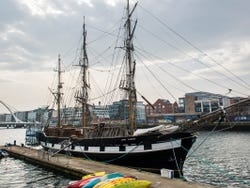 Meet your guide at the scheduled time at the Jeanie Johnston Tall Ship, which is moored off Custom House Quay in Dublin. Climb aboard the living museum ready to delve deep into a period of history that marked Ireland forever.

During the 19th century, Ireland experienced once of the worst periods of famine in its history. During this time, a huge proportion of the population emigrated to the Americas to escape the starvation and disease that killed so many. The Jeanie Johnston was one of the ships that transported these people across the Atlantic.

Throughout your 50 minute tour, you'll learn the details of the Trans-Atlantic journeys made by these Irish emigrants. Exploring the small cabins below deck, you'll get goosebumps imagining the hundreds of people travelling on the ship.

What's more, the museum's lifesize figures allow you to discover the stories of some of the real life people who travelled aboard the Jeanie Johnston in search of a new life across the seas.

Please check local restrictions before traveling. All of our services comply with recommendations to avoid the spread of Covid-19.

You can book up until 11 hours before the activity as long as there are still places. Book now to guarantee your spot.

US$ 12.40
No hidden fees or surcharges
Free cancellation up to 24 hours before the service starts
Book

I travelled with my partner
Show all the reviews
like

9.60 / 10 649 reviews
Our Dublin tour is the best way to discover the capital, taking in the main monuments, neighbourhoods, and stories which make up the city. What's more, it's free!
Free!
Book
like

9.40 / 10 43 reviews
Discover the wild beauty of the Cliffs of Moher: explore the Irish coastline, The Burren and Galway on this unmissable day trip from Dublin .
US$ 56.50
Book
like

8 / 10 15 reviews
The Dublin Pass offers free entrance to over 30 top attractions in Dublin, including the Guinness Storehouse, Christ Church Cathedral, and more.
US$ 79.10
Book