Created by volcanic activity between 50 and 60 million years ago, this stunning complex of 40,000 interlocking basalt columns is today one of the symbols of Ireland itself, and a must-see attraction. 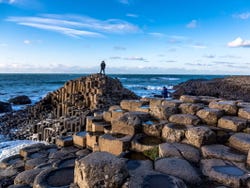 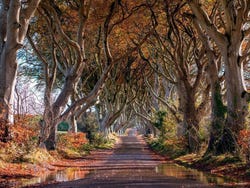 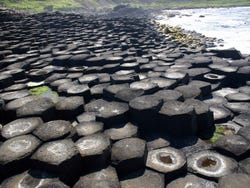 The tour leaves Parnell Square North and heads northwards, crossing into Northern Ireland and to the very tip of the island itself, only a few short miles from Scottish soil (separated by water of course!).

On the way, we'll make a stop at the Dark Hedges, beech trees which, planted 350 years ago, form an eerie and atmospheric passage seemingly filled with malicious intent. You can stretch your legs, and take photos, all the while searching for the grey lady said to haunt the twisted boughs. And Game of Thrones fans will surely recognise it from the series, when Arya Stark travels from Kings Landing to join the Night's Watch.

After a total of about three hours on the road, we'll arrive at Giant's Causeway, a UNESCO world heritage site and the '8th wonder of the world'. Although the official explanation states that volcanic activity produced these striking pillars of stone, local legend states that the causeway was built by the Irish Giant Finn McCool, who was challenged to a fight by a Scottish giant, as a bridge to cross the sea to the mainland and face his adversary.

After almost two hours at the causeway, we'll head to Carrick-a-Rede rope bridge, used by fishermen for the last 300 years to catch salmon in a very unique way. The reason it was possible has to do with the size of the chasm between Carrickarede Island and the mainland. Salmon got confused thinking it was a river mouth, so they would swim 'upstream' into the fishermen’s nets. This would give the local fishermen massive hauls of salmon but was detrimental to the salmon population, so now it is a tourist attraction owned by the National trust. It's 66ft long and 98ft high hanging over a chasm and can be crossed from the mainland to spend time on the Carrickarede Island. Only for the brave!

On the way back to Dublin we'll make a stop in the other Irish capital: Belfast, the capital of Northern Ireland. Here you'll have time for a flying visit, take pictures of the impressive City Hall, walk down the main shopping streets, and maybe get some food.

All of our providers comply with local legislation and applicable health recommendations to avoid the spread of Covid-19.

The activity takes place with a guide that speaks in english.

Transfer to and from all locations.

Ticket for the bridge crossing.

Pick up and drop off from hotel

You can book up until 30 hours before the activity as long as there are still places. Book now to guarantee your spot.

All services published on Civitatis are carried out in accordance with our Sustainability Code. Specifically, this activity applies the following practices: Show more

US$ 102.90
Free cancellation up to 24 hours before the service starts
Book

Really good trip! Had a great day! Our bus driver was Andre and our guides name was Daniel both were extremely friendly and accommodating. Well worth the price would definitely recommend.

I travelled with teenagers
8

Nice day to visit except the weather. In case of bad weather nothing is planned to shelter! The Belfast stop outside the City Hall is of little use; the City hall closed before our arrival. . A stop in the Titanic district would have been more profitable. Opinion translated. Show original.

I travelled with teenagers
10

Francesca and captain were amazing. Only notice that no effort is done for non English speaking people

I travelled with my partner
10

I travelled with teenagers
Show all the reviews
like Free

9.60 / 10 8,708 reviews
Our Dublin tour is the best way to discover the capital, taking in the main monuments, neighbourhoods, and stories which make up the city. What's more, it's free!
Free!
Book
like

10 / 10 1 review
Explore Dublin in the most exciting way possible: on board an amphibious vehicle! On this fun tour by land and sea, you will discover the main monuments and history of the city.
US$ 30.20
Book
like

9.70 / 10 85 reviews
Explore the sights around the Irish capital with this Dublin Private Tour. You'll have an exclusive guide at your disposal to discover the city with your group.
US$ 119.80 per group
Book