Established in 1908, it is currently the oldest modern art gallery in Ireland.

In 1905, the Irish art collector Hugh Lane donated his collection of Impressionist paintings to the Dublin Corporation. When he realized that the paintings were hung in a place which he thought was inappropriate, he decided to give his collection to the National Gallery in London.

He later negotiated with the Dublin Corporation and agreed to leave them the paintings if they placed them in a gallery. However, he didn’t leave proof of this new agreement in his will and was killed when the German army torpedoed the Lusitania in 1915. This led to a long dispute between London and Dublin for the paintings.

Finally, it was agreed to share the paintings between London and Dublin. Until 1933, the Hugh Lane Gallery was situated in Harcourt Street until it was transferred to the neo-classical Charlemont House.

One of the gallery’s highlights is Francis Bacon’s studio. It was donated to the Hugh Lane Gallery and directly relocated from London with all the objects included, such as the dust, doors, walls and ceiling.

Just in front of the main entrance is the Stained Glass Room, a small room with several stained glass windows that reflect on the visitors as they walk inside.

The Gallery also houses a collection donated by Sean Scully, a renowned abstract artist, that offers paintings from the 80s to the present day. 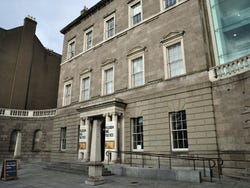 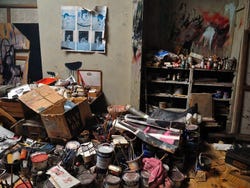 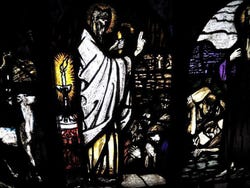