The Dunblin Wax Museum is divided into various themes. Each room has a sound system that must be activated by visitors when they walk into a room. The following rooms are the highlights of the museum:

The museum’s wax figures aren’t very impressive, but the museum is very entertaining. It closes a little later than other museums in Dublin and is in the city centre, making it a great activity for the evening of a cold day. 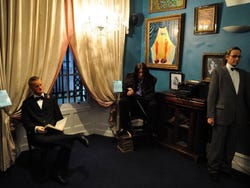