Located in the heart of Dublin and founded in the dissolved Augustinian monastery, the university campus is 190.000 square meters and a beautiful oasis for students.

Although only Protestants could study at Trinity College when it opened, Catholic students were admitted from 1793.

The Library of Trinity College

The Library of Trinity College holds the largest collection of books and manuscripts in Ireland. Since 1801, it receives a copy of all the paperbacks published both in Ireland and Great Britain free of charge. As a result of this right, it has nearly 3 million books distributed in eight different buildings.

The oldest building is called the Old Library and was built between 1712 and 1732. One of its highlights is the “Long Room”, the structure’s 65-meters-long main hall. It houses 200.000 of the Library’s earliest books.

The endless shelves packed with all types of books give off a very distinct smell of wood mixed with old paper. You’ll also marvel at the room’s dozen marble busts looking down on you and admire a medieval Gaelic harp, one of the oldest in Ireland made of oak and willow with bronze strings.

The Book of Kells is the Library’s treasure. This famous manuscript contains the four Gospels of the New Testament written in Latin and beautifully decorated with bright colors.

It is thought that the Book of Kells was transcribed during the ninth century by the monks of Iona Abbey. At that time, the Vikings raided Iona and the monks that survived fled to the Abbey of Kells.

Hundreds of years later, the manuscript was sent to Dublin and then to Trinity College in 1661 for its preservation. Currently, the Book of Kells is on display at the Old Library and accompanied by an exhibition that explains in detail its content.

Exploring Trinity College is a definite must when visiting Dublin. The University’s campus is ideal to stroll around, admiring the various elegant buildings, then marveling at the Book of Kells, surrounded by century-old books and magnificent decoration and sculptures. 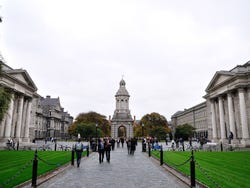 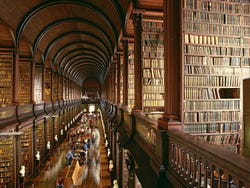 Main hall of the Old Library 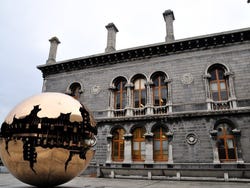 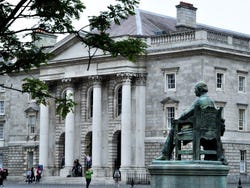 It varies depending on the season. We recommend you check the official website. 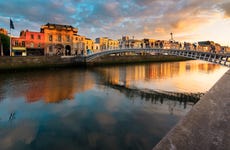