The eighteenth-century Custom House is an architectonic masterpiece. Its beautiful façade is especially outstanding with a Doric-style portico surrounded by large pavilions and a bronze dome crowned by a statue, a customs symbol.

Rising from the ashes

Although the building was initially designed for collecting customs duties, it was soon used as the nerve center of the Local Government Board for Ireland.

During the Irish War of Independence, in 1921, the IRA set the building on fire and caused irreparable damage to the structure’s interior burning many historical documents. It was rebuilt in 1928 and during the 1980s, it was restored again and completed in 1991.

Since it was reopened after being restored, the Custom House has become the Department of the Environment.  The Custom House is the most striking building on the banks of River Liffey. Its monumental façade is well worth taking a photo of both during the day and at nighttime.

If you want to see Custom House in all its glory, we recommend that you take a cruise along the Liffey, to admire it from the water. 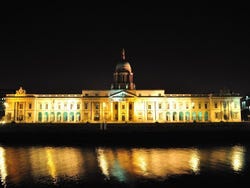