Explore Ireland's luscious green landscapes on this tour to the Glendalough valley, where St. Kevin founded a monastery in the 6th Century, as well as Wicklow and Kilkenny. 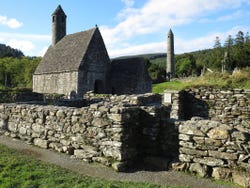 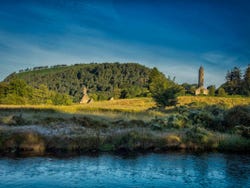 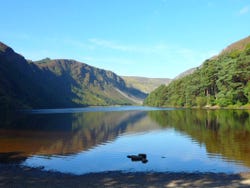 Set off from Dublin at 08.45 am, on the way to see the "Glen of Two Lakes" - Glendalough as it's known - one of the most iconic green spaces in Ireland. It was here that St. Kevin, an Irish saint who supposedly lived for 120 years, founded the Glendalough monastery, becoming its first abbot in the 6th century.

For over 500 years this monastery was one of Ireland's greatest places of learning and scholarship, but in 1214 the original building was destroyed by Norman invaders, with the building seen today thanks to a reconstruction project beginning in 1878 - which also encompassed the network of walkways which today make the area a pleasure to visit, and one of the area's top tourist attractions.

Once there, you'll take a walking tour of the area, and included in the price of the day trip is entry to the Glendalough Monastic Settlement, giving you the opportunity to discover the monumental heritage of the area for yourself.

Then we'll begin on a scenic drive across from the Glendalough valley, across the Wicklow mountains and towards Kilkenny. This national park covers the majority of County Wicklow, coated with beautiful swathes of purple heath and bog.

Then we'll explore Kilkenny, Eastern Ireland's medieval gem, and another glimpse of the long history of the region. You'll take a guided tour, taking in the buildings from the city's past which remain intact, such as the Kilkenny Castle and city walls, and even the round tower remains - once part of another monastery built in the 6th century, by another Irish saint, Saint Canice.

After a jam-packed day exploring Ireland's beauty and heritage, you'll climb back aboard the bus and head back to Dublin, arriving around 6 pm.

The use of masks is obligatory. Masks will be given to those clients who do not have their own.

Alcohol gel will be available before, during, and after the service.

The capacity of all means of transport will be reduced to 50% of their maximum capacity.

Live on board commentary.

Free WIFI on board the coach.

Entry to the Glendalough monastic settlement.

You can book up to the start time, as long as there are places remaining. Book now to guarantee your spot.

It was a very interesting and interesting excursion. We loved the explanations from guide Ryan and the friendliness of the driver Paul. Opinion translated. Show original.

I travelled by myself
10

It was a perfect tour, full of facts. Our guide was superb. I'll totally recommend it

I travelled by myself
Show all the reviews
like

9.60 / 10 9,092 reviews
Our Dublin tour is the best way to discover the capital, taking in the main monuments, neighbourhoods, and stories which make up the city. What's more, it's free!
Free!
Book
like

9.40 / 10 28 reviews
Discover the wild beauty of the Cliffs of Moher: explore the Irish coastline, The Burren and Galway on this unmissable day trip from Dublin .
US$ 58.60
Book
like

10 / 10 4 reviews
Discover the secrets of the Titanic, follow in mythical footsteps on the awe-inspiring Giant's Causeway and explore vibrant Belfast on this unmissable full-day trip from Dublin.
US$ 82
Book