Change your euros for pounds and see Ireland's other capital, with this day trip to Belfast, the capital of Northern Ireland. A journey into a turbulent history and vibrant present awaits, and the tour even includes a visit to the Titanic Museum. 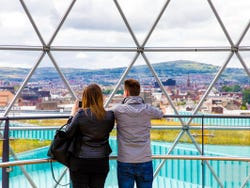 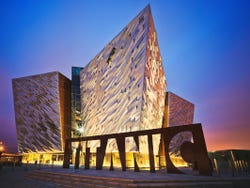 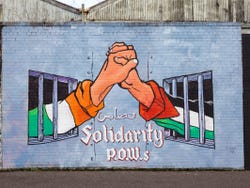 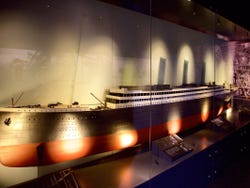 Your guide will start off the day with a trip to east Belfast, where the world-famous, and ill-fated, Titanic ship was built and set sail. The Titanic Experience is the museum dedicated to the world's most famous boat, and the third star of the Oscar-winning film featuring Leonardo Dicaprio and Kate Winslett boasts nine interactive galleries including special effects, scale reproductions and even rides.

These simmering sectarian tensions would continue to bubble over decades, finally coming to the boil in the 1970s: the beginning of what became known as 'The Troubles'. Over three decades an insurgent conflict of bombings, killings and kidnappings by separatists echoed by bloody interventions from the British army left Belfast deeply wounded city, the scars of which are still visible.

Our guide will take you to the infamous Peace Wall, to explain its significance both then and now, with tensions lessened but still very much present. Then on to the Republican Museum, for total immersion in the fascinating history of the rebellion and the Republican movement which has given Ireland its unique character.

You'll also have free time in the city centre: the city hall seems almost Italian in its neoclassical splendour and, Belfast even has its very own leaning tower - the Albert Memorial Clock - which is keeled four feet over from its vertical position.

On the way back you'll listen to some traditional Irish music on the coach, before arriving back to Dublin around 7 pm.

As part of the UK, the currency in Belfast is pounds sterling. Shops will not accept euros and to pay in cash you will need pounds. Card transactions should not be affected.

The use of masks is obligatory. The client must bring their own mask.

Alcoholic drinks are not available.

Entry to the Titanic Experience.

Guided tour of Belfast with an expert local guide.

You can book up until 8 hours before the activity as long as there are still places. Book now to guarantee your spot.

Non refundable. You may not cancel this activity.

9.60 / 10 9,411 reviews
Our Dublin tour is the best way to discover the capital, taking in the main monuments, neighbourhoods, and stories which make up the city. What's more, it's free!
Free!
Book
like

9.40 / 10 31 reviews
Discover the wild beauty of the Cliffs of Moher: explore the Irish coastline, The Burren and Galway on this unmissable day trip from Dublin .
US$ 57.80
Book
like

9.70 / 10 13 reviews
Created by volcanic activity between 50 and 60 million years ago, this stunning complex of 40,000 interlocking basalt columns is today one of the symbols of Ireland itself.
US$ 67.10
Book